By Unknown - April 17, 2014
Cold rain pelted the pond and rickety wooden pier, fewer than a hundred feet from where she worked the shovel.  Despite the rain, she continued digging the grave beneath the tree where she had so often read when the weather was nice.  She wanted it to be deep enough that other animals would not desecrate Rusty’s final resting spot.  With a trembling hand, blurred vision, and mucus running into her mouth, she had put him down that morning.  Rusty had smelled, despite repeated baths; the stench of old dog and pending death clinging like flies to a horse’s eyes.

Before that, he’d slowed down, of course, growing mellow, docile, and constant - a silent partner in an equation that often included coffee and a good book.  Her naturally cold feet had been warmed with his constant presence at the foot of her bed, and lightning, which had always troubled her, was made bearable on many an October eve. 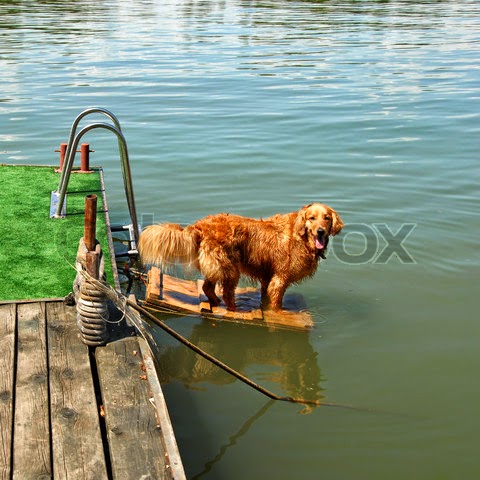 Even earlier, Rusty had consoled her when her husband left, large wet eyes seeming to say she was better off without the clod.  Rusty had stayed far enough from her horse to avoid a hoof but close enough to make clear his loyalties when she and the clod rode together, usually looking for strays.  Baring his teeth when the clod became hostile with bourbon, Rusty had taken more than one kick to the head in defense of his mistress.  Folks who knew them both had been relieved when the clod was replaced in the old, lime green Ford pickup she drove on monthly trips into town - Rusty a mainstay the clod could never be.

As a young dog, Rusty had boundless energy, and she had shed a doughy look as their hikes increased, foraying deeper into the wooded hills behind the cabin.   New found, lean confidence had made the clod leery, as if he sensed she could live without him.  Although without Rusty it was doubtful she would have survived the pneumonia that had stricken her when the clod had been away on a long haul.  The heat from the dog’s body had been her only warmth when the firewood ran low and her strength to get more, still lower.

Many times she had thought back to first finding Rusty, or more accurately, his finding her.  Like now, she had been standing in the rain, but at the end of the pier, her hair matted to her skull and her vision blurred.  She’d been shivering, the cold being the least of the contributing factors, as she gazed into the murky lake disturbed by raindrops that pocked its surface.  It was then that she felt eyes on her - no human for miles around - and she had slowly pivoted.  The Golden Retriever was standing with hind legs in the mud and forelegs on the start of the pier.  He had approached her cautiously, taken the rope that dangled from the cement block in her arms, and pulled her back from the brink.