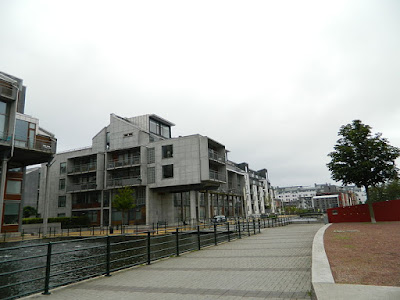 The girl - the other girl - is pushing the stripy pushchair along the pavement. Aldi carrier bags swing from both handles. She almost walks into me. The baby is playing with its feet. The eyes of the child in the pram are his eyes, green and bright.

Those are the eyes that I once fell into, coiled together on that old sofa with the stuffing bleeding out, our hands exploring one another for the first time.

Their baby has snot snaking down towards its lips. They’re his lips, too. His warm lips on mine on that sweaty sofa, the teenage mingle of sweat and aftershave, stolen from his dad’s bathroom cabinet.

I’ve replayed this scene a thousand times – bumping into him, or bumping into her, bumping into them both. Showing him I’m fine, I’m over it. I’ve done all right for myself, thanks. But the baby, this baby with his eyes and his lips has stalled me.

He was a big fish in our small home town, once. He reeled me in, threw his affection around for a while. Before unhooking me, letting me go. Now he’s just a minnow, pulling this other girl and baby along in his wake.

The baby with his eyes, his lips.

In her dead eyes I see my alternate life. The one that got away. Her adventures confined now to a snotty child and budget chicken korma.

When we meet on the pavement, him and the girl – the adventurous one – and their snotty child, the one with his eyes, his lips, I don’t say any of the things I thought I’d say.

I don’t tell him what a success I am. I don’t say Remember me? I just smile. I just stand there and smile, politely.