A Mockery of Tears

By Unknown - December 09, 2016
Grass, grown tall, cuts at his arms. He swipes back, but blade after blade they fight him, drawing lines of blood that serve only to feed the gasping soil. Poppies parade past him as he runs. Their stems erect, their heads tilted back, they watch him leap and fly, tearing through the endless green.

A shout: Captain! Captain! The call, it twists around him, dizzying in its antiphony. Pulled forwards and then back by the words, he stumbles in confusion, then rights himself and continues to trample through the virgin field. Decapitating poppies as he passes, petals dance like the damned around him, fluttering to the ground to form a blood red pool. Black seeds scatter across the mass of petals, only to be crushed beneath the Captain’s feet as he pounds on and on.

Again, there is the call. This time closer but he doesn’t hesitate. On he runs; faster and faster, until he trips. There is the sensation of falling, a velvet thud resounds as he hits the ground, then black. How long he lies there he isn’t sure, but when he opens his eyes those broken petals have fallen upon and around him. A reassuring blanket, they act as his own personal shroud, protecting him from what lies beyond.

Men next to women and children; they reach out around him. Legs lean on heads. Torsos stretch out across arms. Innocents that beseech him; a saviour who has arrived too late. Gazing down, he takes in the single gunshot wound to each head, the stream of dried blood that lines each face in a mockery of tears.

He crouches beside a young girl who clutches at a bed sheet as though to protect her. He strokes her cheek then wipes away that bloody tear. Beside her, a baby lies in his mother’s arms, his head buried between her small breasts so he won’t see the bullet coming. In death his mother rests her head on his, forevermore kissing his limp, greasy hair.

“Captain, Captain!” The call is almost on top of him now and he no longer resists the cries of his men.

“Here,” he shouts and within seconds he and his discovery are surrounded. Moments pass, then a young Private steps forward. As he reaches his arm down, the Captain notices a white flower attached to the young officer’s lapel. Anemone, he thinks; daughter of the wind. Extending his hand upwards, the Captain reaches past the proffered arm and instead touches the flower. 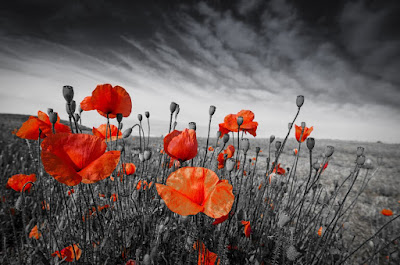