A Spell in France

By Unknown - March 19, 2017
‘I believe I lost my husband outside the Church of Miracles. I knew he had been there at the time in the gardens, which were dark green and dismal after rain. I was trying to use up the end of a long roll of film and called out to him. He looked back at me and I think he smiled. But when the photographs came back from the developer, he was no longer there. You could just about make out some distant shape, almost a shadow, at the end of the avenue of cypresses, but it no longer resembled a person.’

Cafe Aphra follower M.S. Clary has won three prizes for short fiction and has now published her first novel, A Spell in France, with Matador. It is available as an eBook on Amazon Kindle, Apple iPad and all electronic readers. 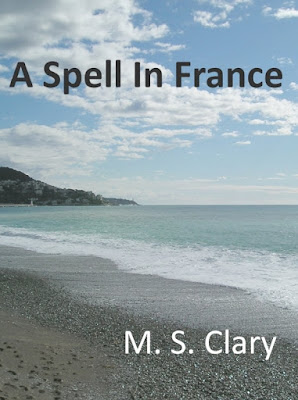 Cafe Aphra: Tell us a little bit about your novel, A Spell in France. How would you sum it up for a potential reader?

M.S. Clary: It's a psychological thriller which involves a mysterious disappearance and its aftermath.

Cafe Aphra: Can you tell us about the writing process?

M.S. Clary: I probably started A Spell in France about five years ago and worked on it in fits and starts. I joined a writing group, which I think helped me to focus on finishing it. Then I was lucky, I had the benefit of working with an editor at Bloomsbury for a year.

M.S. Clary: Well yes, it was a very interesting experience. Initially the book was greeted with great enthusiasm by Bloomsbury but I came slowly to the realisation that it was probably not for them; time was going on, so decided to try to go it alone.

Cafe Aphra: Is that how you came to the decision to self-publish?

M.S. Clary: Yes. At thirty or forty-something, many decades and possibilities lie ahead, but I felt for me, time was running out! I wanted to put it aside and get on with something new. So I decided to publish the novel with Matador, which is part of Troubador Publishing.

Cafe Aphra: Matador certainly has a very good reputation as a self-publishing house. And what project are you working on now?

M.S. Clary: I'm 3/4 way through the first draft of a second novel based on moral dilemmas, and have reached the difficult stage of trying to draw all the strands together... I'm also contributing to an anthology of short stories my Oxford-based writing group is currently getting ready for publication.

Cafe Aphra: Thanks very much for your time and for sharing these extracts of A Spell in France with us. Good luck with finishing your second novel!

'CHAPTER ONE: The drive to Nice had taken nearly ten hours. Before we set out, Trevor was confident we could do it in six. I used to believe that if we hadn't chosen to stop there, things might have turned out differently. But I no longer think that. It would have altered nothing...'

To read more about M.S.Clary and her writing, check out her website here.