By Unknown - June 16, 2017
June was an unpredictable month of little storms. At three o’clock, a pale Caribbean sun came into view and the girls begged Beatrice to drive them to the sea for an afternoon dip. They missed the salty heat of coral beaches and the iridescent waves.

When they arrived at the deserted beach, the ocean was a cloudy colour. Seagulls sailed in the wind that carried the pitiless odor of seaweed. The girls sighed at the brown sea, and vented to their mother. After ten minutes of lying beneath an overcast sky, everyone retreated to the car and brushed the sand off their feet.

Secretly, Beatrice was glad for the rain. A change in climate was auspicious for a dry island lashed by the long rays of a mercurial sun. But the rain also consoled her. It helped her sleep. Most nights, she would toss and turn on the bed and it was only the clamor of the rain on the galvanized tin roof that could soothe her.

Tonight, she lay awake waiting. There was no need for a fan. The trade winds blew through the pale louvered windows with a salutary punctuality. She listened to the mindless symphony of the cicadas and heard the dogs barking as they scampered through the long grass, chasing after someone’s cow that had come to graze in the garden. But where was the rain?

She moved the cotton sheet aside and in the semi-darkness, put her arm around her five-year old daughter, Sophia, who was lying motionless beside her on the single bed like a small wounded bird.

In the dim light that came from the neighboring house, her eyes fixed on the silhouettes of her eldest daughter and her older sister, who slept side by side on the other bed. The four of them shared the one room crammed with old wicker furniture, forgotten clothes and stacks of albums filled with brown photos and nostalgic fingerprints.

A month ago, after work, she had arrived home and noticed that all of his shoes, which were normally piled up near the front door, were gone. That afternoon, the house suddenly changed, as if it had become a stranger. It was alive and watching her. Through the window, ferns peeked out of the cracks between stone walls. She did not cry then, but she would cry every night for weeks.

She could not afford to pay the rent alone. They would have to leave too. On their final day, the girls idled in the yard and climbed the mango tree for the last time, with its metallic-looking leaves. As soon as Beatrice moved into her sister’s one bedroom house, little Sophia began having re-occurring dreams about a burglar. The burglar, who was a tall thin man, would enter their house through a small window. In the dream, Sophia would try to scream for help, but no sound would come.

In the dark of the bedroom, Beatrice kissed her daughter’s damp forehead. A gust of cool air blew through the shutters. The rain had finally come. Like a singer with a metallic voice, it started humming. Then, after a short pause, it rose to a crescendo and her thoughts faded in its white noise. 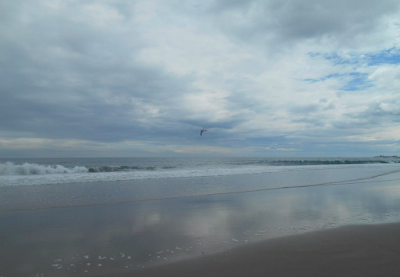