By Unknown - October 27, 2017
She remembers chasing butterflies across the freshly mown lawn, the air ripe with lavender, her dad drinking cider on the patio. She danced from bush to bush, carving circles in the sky with a fishing net made of bamboo and plastic mesh.

Thirty years later, she sits in the darkened corner of a hotel conference suite, her hair scraped back, her eyes hidden behind tortoiseshell frames. She’s surrounded by colleagues sipping Cabernet this and Pinot that. The man on the stage speaks with the wayward tones of someone who’s been drinking since lunch but she isn’t listening. Leaning into the microphone he says, “Which brings us to that most coveted award, Employee of the Year.”

She never caught a butterfly. Eventually she collapsed on the grass, exhausted. With a handkerchief from his pocket, her dad stroked the tears from her cheeks, saying “You tried your best. That’s all that matters.” Sitting her on his knee, he said “Don’t be upset. There’s nothing in this world more important than little girls with great big smiles.” Two weeks later there was a boating accident off the Devon coast. Her dad’s body was never found.

In the hotel conference suite, her colleagues clap politely as she steps onto the stage. All the evenings she spent in the office, all the weekends she worked from home, they all led to this. Her victory is a surprise to no one. She hoped she would feel something more.

When she arrives back at her table she doesn’t sit down. Still clutching her trophy, she leaves the hotel, squinting in the early evening sunlight. The air smells of childhood and rock pools. Souvenir shops spill out onto the street and Bob Marley sings through the open window of a passing car. On the other side of the road, she spots a butterfly on a buddleia bush. The butterfly takes flight and flutters clumsily in the breeze. She follows it past racks of postcards, swapping her trophy for a child’s fishing net on the way.

The butterfly leads her to the beach, where she slips off her heels and curls her toes in the warm sand. Net held high, she pursues it till waves break against her knees and her dress clings to her thighs. The water is terribly cold but she can’t stop.

She won’t be happy until she has the butterfly in her net. 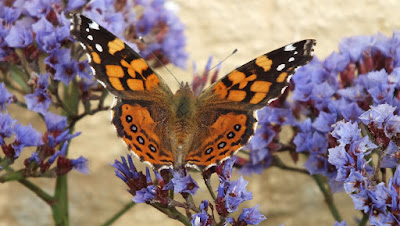