Thanks for Calling by Robert Madden

By Cafe Aphra - May 18, 2018
Brian's father made some final touches with his pocket knife. He would have much preferred a piece of basswood, or even some pine. But due to the way things were, he had to make do with a lump of MDF scavenged from a skip.

It was painful for Brian to watch. The old man scratching away at a piece of scrap, in a futile attempt to win back his life's worth.

'Now son, none of that.' He continued to work his knife. 'When this is complete, you'll see. Things will be back on track.'

When the crash came, it was so ruinous - so finite - that they didn't bother to reopen the markets. All stockholders were abandoned. Total and permanent wipe-out.

'Dad, are you listening? Your holdings were -.'

'Here we go,' said Brian's father. He held up his creation.

In fairness, he had done a decent job. A grid of numbers was recognisable below an etching of a smiley-dog-face screensaver. But even if it did show craftsmanship, it was what it was. He didn't really think it would work, did he?

'Excuse me, son. Do you mind?' said Brian's father, pointing to his creation. 'I need to get this.'

He placed it against his ear.

'Hello. Ah Mary, thanks for calling,' he smiled. A tear drop ran down his cheek. 'I wanted to ask you about my pension.' 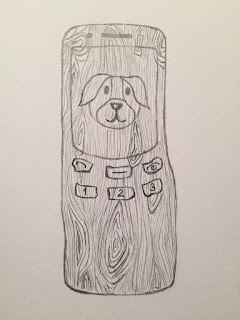