She looked like a valentine; her favourite colour was pink. In fact, she only ate heart-shaped boiled sweets. When she went out walking with her ruffled parasol, her fingernails were painted in ascending shades of pink from light salmon to hot-whore fuchsia, never so saturated to hit violet or red. 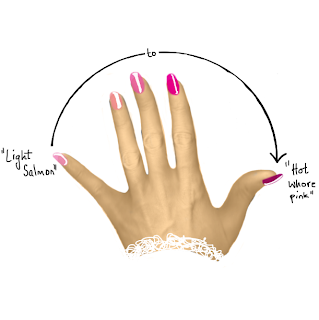 Her hair she wore in thoroughly-combed ringlets and regularly looked out in advance to avoid puddles or dogshit or anything, indeed, that might make her walk feel unplanned or less than perfect. She only dated girls. She only went walking at sunsets or dawn, when the sky was appropriately tinted. She was a white girl, therefore her skin was close to pink. Her labia were also an appropriate colour.


She neared the lake in the middle of the park. She enjoyed asphalt and, of course, the roses that municipal gardeners worthy of the name had planted. There was a bush to her left; every little blossom on it was a papery heart, flowers shaped like valentines. The more mature ones had grown doilies around their edges; pink lettering was developing to read I LOVE YOU or BE MINE.
She blinked. When she opened her eyes, she saw gutted dirty hearts on the bushes, not pink but red beating lumps, blood and purple muscle, alive and far too many per pale-green bush.
She reached the lake.
She set down her parasol; plunged it into the soggy earth. Unlike the asphalt, there was a give to it. She saw a stray thread on the parasol, and pulled it until an entire ruffle unravelled. She wore a dainty curled earring of pink-enamelled silver. She took it off and twisted it into a very wrong shape, then spun the thread around the hook and cast it into the manicured artificial lake.
Immediately there was an answering tug on the other end of her heartstring and she reeled in a silver salmon. She got down on her knees in the mud; the stains made Pangaea shapes on her frock; she bit into the fish and tore her teeth through its head, chomping right through the gullet. She used her longest fingernail, which sometimes she used to sniff up piles of pink cocaine, to slit the fish from neck to tail.
Her hands were red. Ruby at her elbow-laces. She reached in and grabbed the fish’s guts and pulled slime out in one smooth piece. She’d hoped for pale pink pearls, but the salmon was male and she fetched a slick white testes clump, like a banana. She threw the innards on the wet, messy grass and fingernail-slit the bloodline remaining. She rubbed the flesh in the water, so that the salmon, seen from the inside, was pink and nearly clean and pink; a pale and drained pink.