By Unknown - December 05, 2013
My little brother didn’t cry like other babies.  He bleated, like a cleaved pig.  I clapped my palms against my ears - it never helped.

“… a son… to carry on our name… and toss the ball around.”  Our walls were thin.  “…tea parties and dolls… not my thing.”  And dad’s voice carried.

“We love you so much honey,” ma stroked my arm while she lied, “that’s why we want another.”

I cried into my pillow and dreamt I was a boy.

Pa moved my cups and saucers to the den and made Danny a bed in my garden playhouse.  Come nap time, ma laid him in it, shut the doors – midnight blue – and tiptoed backwards.  As she inched by, she’d press a chubby finger to her lips, tousle my hair and scratch Burke’s floppy ears.

It was a crisp autumn morn.  Upstairs, the vacuum hummed and sucked but below, Danny’s shrieks rang out like a bludgeoned porpoise - and split the soft hour.

Our daschund panted when he heard biscuits jostling in their tin; he loved the pink, liver-flavored ones.  I taunted ol’ Burke before I lobbed the treat in my playhouse and pulled open the dark blue doors.

His tail smacked against the plastic walls.  My lil’ brother choked then stilled. His silence proved louder than his screams.

“… and has your dog attacked before ma’am?”  The deputy was unexpectedly short - I was disappointed by that.

“Never.”  Ma sounded weary - that scared me more.  From the stairwell, I could only see her when she paced past the threshold between the kitchen and the hallway.  Her heels clacked against the tiles.


Danny had only been dead three days.

Ma turned her back to the deputy - stood stone in the archway as he droned on, “… but he had him by the throat ma’am.  Must’a jerked him pretty hard… crushed neck and all… ”

Her eyes darted to and fro; then angled up the stairs, docked in mine and slowly widened.  I bowed my head.

I didn’t go to Danny’s funeral - ma said I didn’t have to.  Pa left when I was nine.

Ma arched her back and tugged at the hem of her house-dress.  “Don’t be silly dear,” her eyes like a fish, “you never hurt your brother.”

Ma struck me - for the first and only time.

Each fall, we take our boy to see his gramma. She’s buried next to Danny beneath a canopy of Balsam firs.

Someday I may tell them.  But for now, I lay a rose upon each grave… and race my son to the car. 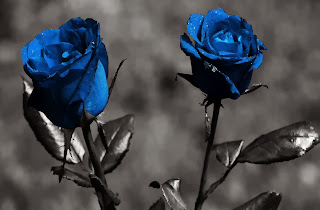