By Unknown - November 13, 2014
The land of mullets, that was Alaska to a T (with a long tail hanging down from the flat top) and particularly the case in Clam Point, a small community on the peninsula south of Anchorage. Fashion was traditionally twelve years behind Paris, Tokyo, New York and London (grunge only hit in 2003) but recently cable TV and the internet had resulted in people's clothing and hairdos being only a decade behind.

That's when Molly, 17, asked her cousin to start sending care packages from London. Molly, atypically concerned with grooming in a state where fishing hip-waders counted as semi-formal, insisted that Carrie send her large packets bubble-wrapped and swaddled in brown paper, labelled A FASHION CARE PACKAGE TO CLAM POINT, ALASKA in big red letters, so the post office folks would realise that they were living in the style equivalent of an Alaskan glacier (inching forward while always regressing into the inevitable mullet) and, in Molly’s opinion, might do something about their flannel shirts tied around their waists, or at least switch up their Van Halen T-shirts.

In January 2013, Molly received a Top Shop goodie bag full of faux-90s costume jewellery and the latest issue of Grazia.

In March, Carrie sent Molly information about cool indie-kidz chatrooms and seventeen different retro badges for Molly to attach to her slogan T-shirt, only two of them retro-political ("Bliar" and "Stop the War"). Retro was now 2003, Molly astutely observed.

In August, there was just a pair of blood-red court-shoes ("They're still trendy again this autumn," Carrie wrote to Molly, "but I don't think they'll be next year, so wear them out.").

The September package, however, looked very peculiar to Molly. She took it home and didn't open it straight away at the post office the way she always did when she picked up her mail. The packaging, too crisp; the stamps looked wrong. Well. They were wrong – the date stamped from Cool Britannia was from two years in the future: September 2015. Molly, the most stylishly dressed teenager on the Point in a big-font slogan T-shirt and court-shoes, held her breath and opened the package.

The contents were an identical pair of blood-red court-shoes and a big-font slogan T-shirt, just as August’s package had been. Inside was a note.
Dear Molly,
London has become so avant-garde that it's depeche-mode. Everything's faster, so we have all decided to move ahead to 2015.  As you'll have noticed from reading the style mags I send you, "retro" is becoming closer. Fashion eats itself. It's only two years behind us now in London. These clothes are no good to me here. Or are they so hip it hurts? I can't tell anymore.
Your cousin,
Carrie.

Molly bundled up the clothes, re-addressed the package as A FASHION CARE PACKAGE TO LONDON in ostentatious lettering and mailed it back as a sympathy package to London, for her cousin could certainly use the help. These 2015 vestments were very much à la mode. 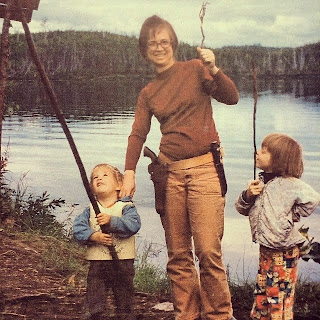 Photo credit (c) Phil Bryson
(The author Kathleen is on the right, wearing what were at the time exceedingly fashionable trousers; she is joined by her stylish mother and little brother)
FFF