“Sorry mate, full up.”
“What do you mean, full up?”
“Just what I said, full up!”
“Haven’t you seen the state of my wife?”
The innkeeper eased his copious figure further around the door frame and cast an indifferent eye over the tiny, tired woman with the blue shawl sitting on the donkey.
“She seems pretty far gone. Oh well. It’s a shame but it’s not my fault you know. If we had a room I’d give it to you mate. It’s this silly census business - bloody Herod with his petty bureaucracy. He just loves it, doesn’t he? All this paperwork. Oh well. Keeps the Romans busy, anyway.”
“Yes, but what about my wife? She’s not going to give birth out here in the street, is she? It’s Christmas for God’s sake!”
“It’s what?”
“Oh nevermind. Look, don’t you even have a stable or something?”
A Roman soldier appeared in the doorway and pushed past them, reeling. He wove a few steps into the street, singing, before he fell and lay face down in the mud, giggling to himself. Joseph and the innkeeper stared. He finally lurched to his feet and staggered off down the street, zigzagging wildly and shouting profanities at no-one in particular.
It was starting to rain and Mary looked visibly pissed-off. This wasn’t good news. His mind searching wildly for possibilities, Joseph’s eyes alighted on a small tatty brown leather pouch lying in the mud where the Roman had fallen. Without thinking, he scooped down to pick it up just as the innkeeper closed the door. Inside was a single bright shiny gold coin. He let out a yelp of joy and hammered on the door. The innkeeper opened up with a face like sour milk.
“You again?”
He was about to shut it when Joseph ducked in and stuck his foot in the door frame.
“Look - we have money,” he said, holding up his find with an enticing smile. “I will give you this whole bright shiny coin if only you’ll find a room for us at your inn until my wife’s given birth. It won’t be more than a day or two, I reckon. Come on, think of everything you could buy with this. That refurbishment?  A new horse and wagon?” He snatched the coin away from the innkeeper’s grubby reaching fingers and shook his head. “Show me the room first.”
The innkeeper turned back, muttering, and led the way up the stairs. “You’ll just have to sleep in our room then,” he wheezed. “My wife and I will sleep in the stable or something. Won’t kill us for a couple of nights, though it is awful cold.”
“Oh well, at least you’ll have the animals to keep you warm,” Joseph suggested, taking in the room. “And straw is an excellent insulator.”
Plush furnishings, glowing embers in the fireplace, four-poster bed. He smiled. No more ear-mashings from Mary. “Yes, this will do nicely,” Joseph nodded, throwing off his cape. “Thank you - arrange for our things to be brought up; I will go and get my wife. Oh and if you could put our donkey in your stable for the night...? He’ll help to keep you warm.”
He winked and tossed the coin up high in the air, watching as it turned over and over as though in slow motion. The innkeeper dived for it, his eyes seeming to pop out of their sockets and his mouth forming a dark O like a gutted fish.
Joseph watched him scrabble around the floor for it, shook his head, and swept off down the stairs to tell Mary. 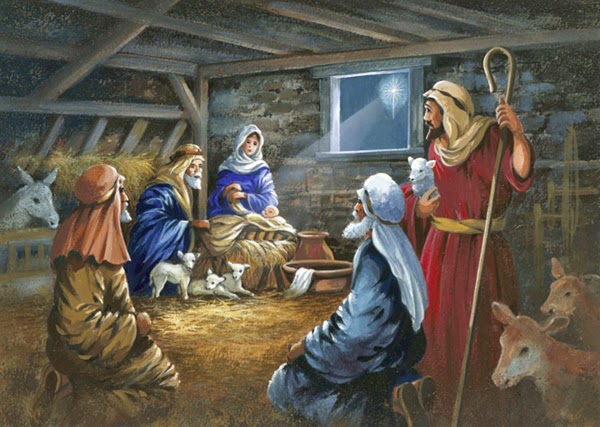