By Unknown - August 28, 2015
“Papa bought me a magic bowl! It can make water dance. It has dragons on. Look, Mama!” I was six. The bowl held me enthralled - far more enthralled than the return of my father from his voyage. He showed me on the atlas where he had been, drew little pictures of the ship in which he had travelled. But I wanted to know how the bowl worked, where its magic came from. “From China,” my father replied, indicating the embroidered silk he had bought my mother, complete with strange-looking people on it.

I kept the bowl, and my childish wish to understand its magic grew over the years. As an only child, I benefited unusually from the education a brother would have had. But my father rued the instruction in natural philosophy I received. It encouraged my fascination with how the world worked - and the apparent magic behind my bowl. I was not a beautiful girl, nor sociable, and combined with long hours in libraries and laboratories, my father worried that I would become unmarriageable.

The way the water jumped and patterned in the bowl when the handles were rubbed kept me entranced, and I became determined to find a way to get to China. But life on the High Seas was deemed entirely unsuitable for a woman - even more risible than the idea of a woman who had understood something of natural philosophy.

Attending a lecture by a young German scientist at the new British Museum, I saw a way forward. Dr Chladni had brought with him a steel plate. He covered it in sand and drew a violin bow across the edge of it. The sand leapt and bounced, and I was struck by the similarity to my magic bowl. I was the only woman present, and had become used to the reactions to my questions and interest - everything from amusement to indignation. But at least I stood out, and Dr Chladni took my questions.

We worked together a great deal over the years: the perfect partnership, in a sense. It was I who discovered that both bowl and steel plate relied upon the resonance created by sound in order to move the substances they held. But it could only be under Ernst Chladni’s name that my discoveries were published. In a way, it suited us both.

I never did marry, but even as my name went unacknowledged for my work, at least I escaped some of the constraints respectability would have conferred. The true magic of my bowl was the freedom it ultimately brought me. 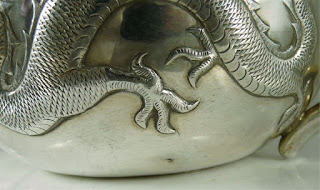