By Unknown - August 14, 2015
Mei Lien was going to the opening night of the first Greyhound dog racing event in Shanghai.

She wore a long yellow silk dress and her maid helped her into her shoes. Her husband was a banker and they had two daughters. The girls wore tight fitting dresses in pale green silk with a blossom pattern, high heels and their hair loose at the back.

“Welcome to the grand opening of Luna Park”, Major McBain said as they entered the private suite. He had introduced Greyhound racing to Shanghai and was their host of the night. Mei Lien was presented with a silk fan with a map of the grounds printed on it, and her daughters were given silk handkerchiefs. The sisters linked arms and walked quickly towards the sound of Jazz. 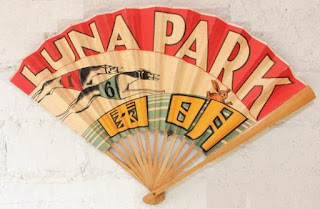 It was a warm, balmy night and the opening fireworks lit up the track which was designed as a Chinese garden, with trees, grass and a rockery. In the first race, her husband placed large bets on two dogs called “Merry Sinner” and “Merry Go Round”.

Mei Lien watched the race, excited by the speed of the Greyhounds chasing the mechanical lure. She thought back to when she was a child running in her garden; she remembered the feel of the grass between her toes and her heart pounding when she stopped. But then she thought of her sixth birthday. Her mother breaking her four smaller toes and bending them backwards under her big toe, breaking the arch of her foot. She felt nauseous thinking of the smell of her feet being tightly bound by bandages that were soaked in animal blood and herbs She had endured the pain for years until her feet were no longer than four inches long.

She wished she could run free like the Greyhounds, but her lotus feet had attracted a wealthy husband and she had done well for her family. Mei Lien smiled contentedly knowing her daughters had been spared her pain as they danced freely to the Jazz.