By Unknown - November 20, 2015
Using the cool of the early morning before the sun rises to become its usual summer furnace, the two boys are preparing for their special day. They comb, they preen, they each shave twice, slyly checking each other over at the same time as they check themselves in the mirror. Each wants to do well yet the other’s success is integral to their own. Each needs the other to be cool, stylish and in control but not to the extent of outdoing the other.

Hopping and skipping down the steps they reach the boat where she is waiting. She’s casual, relaxed, looks as if she has no idea of the boys’ hopes and expectations. Is this an elaborate game? The boys aren’t sure, but the preparation they have put into this encounter is proof that they're prepared to endure a few knock-backs.

She walks to the bows of the clinker-built boat and spreads her towel on the deck. Sitting dangling her feet in the cool waters of the lake she half day-dreams, half watches the boys as they continue their preparations while casting half glances at her. They are desperate to look directly at her, to drink her in but they try to avoid catching her eye. Her loose fitting white cotton dress sets off her golden brown skin and natural sun-bleached hair perfectly. With no apparent effort, she commands the attention of these attractive young men.

The boys, sitting together in the stern of the boat, are almost ready. They strip off their tight fitting tee shirts and rub sun oil onto each other. This ritual demands care so that every inch is equally covered. By the time they have finished, the sun is higher in the sky and its heat is beginning to be felt.

The younger of the boys casually stands and pulls the starter cord for the outboard engine. Nothing. He pulls again. Still nothing. He fiddles with the choke, checks the fuel line and rather self-consciously reaches for the cord a third time. This effort is greeted with the same non-committal cough that the first two pulls achieved. He’s getting uncomfortable now, and his companion is not prepared to risk the same embarrassment.

Smiling, the girl skips down the boat, takes the cord and lightly sets it to the first point of resistance. One sharp pull and the engine dutifully starts. She takes the boys’ place at the helm.


“I thought the plan was for you to take me out.” She smiled as much as spoke the words.

They cruise off into the lake for the day, a day the boys have dreamt of for so long. 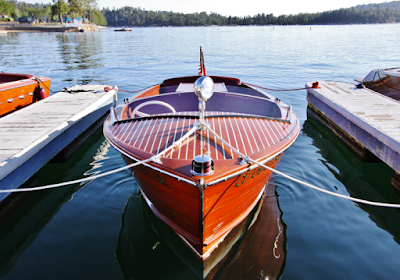