By Unknown - March 11, 2016
There were footprints in the snow all the way to the phone box. Clare shivered outside while she waited for the caller to finish, warming herself with the last but one of the cigarettes she found in a crumpled packet in her coat pocket.

“Cold night”, the woman said as she pushed back the heavy glass door. “You’ve moved into Selkie Cottage haven’t you? Isn’t the phone working yet? That was supposed to have been fixed for you. You should speak to Gordon Ross. I’m Jean Moncrieff by the way.”

“Anne Ramsay,” Clare lied. “I expect there’s been a delay. And I can’t get a signal on my mobile.” She forced a smile.

“Aye, well I’ll not hold you up then. Goodnight.”

Clare watched Jean Moncrieff walk back along the path, her black raincoat flapping against her legs like a nun’s habit. Clare waited until she was out of sight then carefully barred her number before dialling.

“How safe are you?” Rob’s voice was a seductive whisper.

Clare idly traced a gloved finger around one of the window panes, transferring several years of grime and red paint flakes onto the soft wool. “I’m safe enough. Best you don’t know where.”

“OK, but be careful. Your description has been circulated everywhere.”

“I’ll be careful. Don’t worry. But I don’t think I’d better call you again for a while. I need to keep a low profile. I’ve already been noticed coming out to the phone box.”

“Yes, you’re probably right. Where have you put it? Have you got it with you?”

“It’s in a safe place. You don’t need to worry. It’s best you don’t know where.”

“We must have been mad.”

“Yes OK. I don’t want you to freeze to death in that phone box. Call soon.”

“In a few days. You look after yourself.”

Clare walked slowly back to the cottage, smoking her last cigarette. They had been mad. He was right about that. Crazy. They’d never get away with it. Tomorrow or the next day, the local Hamish Macbeth would be knocking on her door.

But why should he? Up here she was Anne Ramsay, author, a long-standing visitor to this remote Scottish island. No-one would connect her with Clare Simpson, the London art dealer, missing since the Millennium theft of a Cezanne from the Ashmolean Museum. All the evidence led to Rob, anyway. She had been careful about that.

Back in the cottage in front of the warm log fire, Clare lifted the red velvet cushions of the sofa and pulled out a flat cardboard box. She poured herself a brandy, then unwrapped Auvers-sur-Oise. It was safe. She was safe. Everything would be fine now. 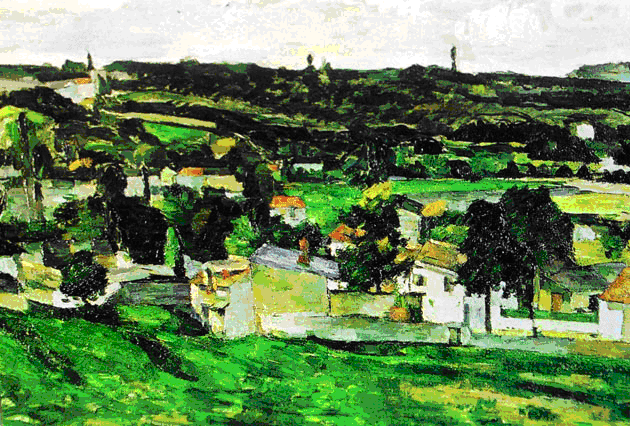 Paul Cezanne's undated and unsigned painting was stolen from Oxford's Ashmolean Museum on the night of 31st December 1999 during a celebration of fireworks for the Millennium.
It has never been recovered.