By Unknown - June 17, 2016
I found a grave. I came on the evidence one day, in a forgotten file, randomly numbered by my camera.

I remember walking through white snakes of sand, lifted by the wind. It blew straight off the North Sea; ice in its jaws.

Always seeking I had strode out, looking for messages in bottles, finding only crackled plastic. Holding my camera with numb hands, it had been too cold to take many photos.

Further up the sand, I passed through the iodine egg-stink of seaweed, then, crunched through broken shells to the path, up and away from the rage of the ocean. The wooden steps were filled with sand, an oil company’s unmaintained project. Corporate social responsibility ravaged by the elements.

On the cliff above the beach, marram grass, pink campion, gorse and broom, grew, holding the sand together with their roots. The fierce wind had stolen my breath as I looked towards the new horizon.

Crumpled red and orange petals had led me through the grass, past the remains of a fire-ring of stones, charred black. Almost at the edge of the cliff, vertebrae were visible, twisting through earth and debris. The corpse lay half dragged out of its resting place. It had been chewed on, half exposed yellowing bones, dark matter and the other half, still grey furred, wet from the dew. The disinterment had been frenzied and fresh. ‘Ben’ was painted on smooth pebbles, pink and white and blue, they had been strewn, displaced from their secretly significant positions.

Here, in sight of a closed-in coastal farm, on the high cliff, I had cried. For intentions and loss, grieving as I never could at a human graveside. I ached for each animal that I had owned; each passing, life spans unmatched.

I wish now that I had covered it up, I could have pushed it back in, replaced the earth. Panic and grief made me move away quickly, I remember the sudden sense of paranoia.

‘Guilt, guilty, guilty’, the seagulls soared and screamed, while the sea wind blasted my tears away.

I returned, many seasons later, to find no evidence of the burial. It was as if it had all been a dream borne on spindrift and tears. I would doubt my own memory, save for the photograph I stole that day long past. 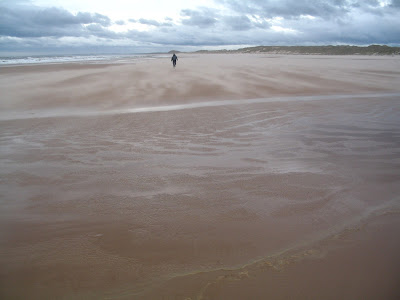