The Other Side of Darkness

By Unknown - November 04, 2016
Ever after this night of the East New York joy ride, Johnny would have a recurring dream: he would be walking in a very deep darkness on a street pushing a gurney toward intersections, watching for traffic lights to see if they remained green, but instead of turning to red they would fade into a blackness and yet he always managed to get over to the other side, and just then an American-Black man whose grandparents were the first real cheap labor slaves - a father to his children - began walking to his side and just as suddenly on his left appeared an African-American cop - a hating "inferiors" kind of guy - walking along a bank slightly above the sidewalk and coming toward him were two young American-Black boys smiling happily, similar to the youngsters he was teaching near Myrtle Avenue close to Bed-Sty, where he told all his students education was a possible door to getting out of their rat-infested slums, and behind them walking slowly with an angry face was another man coming toward him as the man who was Johnny in the dream continued to push forward, crossing every intersection whose light would go from a green to a blinking darkness and when Johnny in the dream looked to his left, lying in the burnt brown grass was the severed head of an African-American.... Johnny always awoke at this point of the dream and recalled vividly how that night upon returning to their apartment overlooking the Flatlands of Brooklyn, surviving the big East New York joy ride when three Black guys wanted to kill a White guy who they thought looked like a Calhoun from South Carolina - since all White guys looked the same to them - he had gone to his four month old son's crib and placed his finger into his hand and only after the baby's tight squeeze and loving smile did he allow himself to cry as a full man. 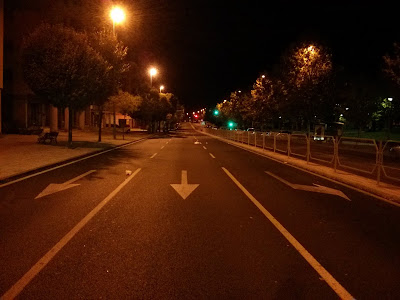