An Afternoon in LA by Craig Hill

By Cafe Aphra - November 10, 2017
It was a bright and placid day. Eric sat alone on his deck, watching the sun creep across the San Fernando Valley at its normal, slow-moving-vehicle pace. Eric was bored. This was not unusual. Eric had been bored for the past 5 years, 4 months and 3 days, ever since he sold his interest in the Fatburger franchising organization.

Franchising had been fun for a while. Hooking new prospects and reeling them in had been more exciting than fly fishing, which he had tried for a while when he lived in Gunnison, Colorado right after college. Before long, however, convincing aspiring franchisees that they needed to commit to at least five outlets to make their investments pay off lost all its luster.

He made enough money by selling out that he would never need to work again if he did not want to. He did not want to. He tried a variety of hobbies. He set up a woodworking shop in the basement and made German beer steins out of recycled bowling pins on a wood-turning lathe. He took piano lessons but could never master anything beyond Werewolves of London.

In the end he decided to just relax into boredom. He spent most of his time lounging on the deck with a cold drink in his hand, watching the weather and listening to old Django Reinhardt records.

His boredom had gradually driven off nearly everyone and everything around him.

His wife began studying Portuguese and cooking things with exotic names like Dobradinha and Bacalhau à Brás. When Eric showed no interest in any of these activities, she moved to Mozambique to start a new life.

His daughter became fascinated with the idea of tracing her roots. She spit in a jar and mailed it to ancestry.com. When she learned that she was three-eighths Irish, she joined a step dancing troupe and left on a world-wide tour.

His son started reading books by Alan Watts, Baba Ram Dass and Thích Nhất Hạnh. He realized that boredom channeled into Buddhist meditation was not boredom at all and entered a monastery in Bhutan.

His cat moved in with the televangelist next door.

Phyllis, his dracaena marginata, had been bored since he repotted her in that dreadful ceramic container he bought in Mazatlán back in the summer of 2010. Being bored did not bother Phyllis in the least, and moving to a new location with different lighting and a different watering schedule can be so traumatic for a mature house plant that she hung around.

The quake hit around 4:50 that afternoon. The sounds of sirens filled the air. Smoke from the fires in the Valley obscured the view of the mountains to the north and east. The televangelist’s house slid off into the Rapture, carrying the televangelist and his cat with it. Eric’s house shook like Carol Doda in her go-go dancing heyday, but remained standing.

“Now THAT,” Eric said, turning to Phyllis, “was exciting.” 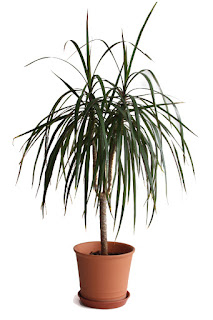