The System by Olivia Jackson

By Cafe Aphra - November 24, 2017
“This is something that’s been a part of my life from the beginning – this sense that we can’t keep living this way, this drive to do something about it, to change the system. It was my mum, see. I saw her get beaten by my dad at least once a week when I was little. And then I saw her beaten by the system again and again. And every time she tried to get back up, to help herself, the police sent her right back to him. And the courts wouldn’t help her either – she didn’t know where to turn, how to get help. So she turned to me. I was only ten. ‘Mikey my lad’ – she called me Mikey when I was little – ‘Mikey my lad, if I didn’t have you I’d have nothing.’ And I took that right to heart. Well you do, don’t you, when you’re that age? So I took it on myself to protect her: just her and me against the world, that’s how it felt. I’d try and get between her and my dad when he was at it, take some of the punches for her. No way I was strong enough to stop him. Eventually my dad overdosed and left her in peace, but it shouldn’t have taken that to keep her safe.

“I feel like I’ve not stopped fighting since, like it’s still her and me against the world, although she’s been gone for years now. But I stood at her funeral and I made her a promise. ‘I’ll fix this, Mum. I’ll make it so what happened to you can’t happen to other women.’ That’s what I promised her, I really did. And I still feel like she’d want me to carry on fighting, to help other people like her, you know – people who are trapped, people who the system won’t help, people who fall through the cracks. I look around me and I see those people everywhere, I meet them all over the place. And I see my mum in their faces and I just want to help, to stop their nightmare.

“That’s why I went into politics, see, and that’s why I’m convinced we’re doing the right thing here. I like to think Mum would be pleased if she could see me now.”

“Okay, better. We’ll need to tweak the bit about the police and courts – someone could fact-check that. Take it from the top again, with more emotion in your voice this time.”

“This is something that’s been a part of my life from the beginning – this sense that we can’t keep living this way, this drive to do something about it, to change the system. It was my mum, see…” 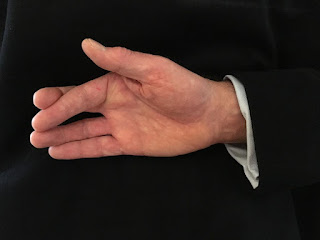