Cherry laid out vegetables in order of cooking on the black marble surface.

Two cloves of garlic on the old wooden chopping board.

The wide body of their Japanese cooking knife, bought in Kyoto where they’d celebrated their twenty-fifth wedding anniversary.

She still had strength to crush garlic…

He would be crushed.

She’d kept their last summer together joyful, organising excursions to visit places they’d been happy before; walking once again their easier walks – all the cliché things their older friends had done. Why do people despise cliché, she wondered.

It was a slow-growing cancer, inoperable. If she wished, her doctors would give her radio and chemo, but the statistics weren’t promising. She reassured them, feeling sorry for the young men who had to give her the news––once her husband’s students, then colleagues––ethically bound not to tell him.

Six months. Perhaps less. Perhaps more. She thought less.
We’ll help, the doctors said. It won’t be painful till near the end.
It was the first time she’d held something back.
Theirs was a good strong marriage. They’d lived good lives and both felt old enough to die without regrets, except one outliving the other.

She would tell him in October, when the leaves were orange, yellow, red; when the lowering sun lit the lake before their home a shimmering gold, when the gingko showered its golden leaves. When it would be soon.

Garlic in one small glass bowl, onions in another.

Her ritual of cooking. Prepared vegetables in glass dishes arranged like a palette. She was a painter. She’d painted his portrait. Cadmium blue eyes that looked love at her; open smile; natural happiness.

She’d leave soups in the freezer so he wouldn’t have to cook, at least the first weeks after she was gone.

Cherry shook water from the leeks she’d been soaking, brushed the remaining soil away, rolled them gently in a clean dishcloth.

He was gentle, always gentle. Sitting on the terrace, away from the crowd, she’d watched him with Olivia at a party the night before. She’d enjoyed the tilting of his head as he listened, his large hands gesturing as he spoke—his familiar gestures, his precious familiar gestures—enjoyed them as if she’d been standing in Olivia’s place, her usual place. He was mostly a listener. Olivia had got him to talk; She was able to listen—would be able to listen––

Leeks sliced into rounds, green in one bowl, white in another.

She would tell him at the last moment when she could no longer hide the pain. She could already feel his sadness. She knew she was irreplaceable. They both were to each other. But women delighted in his company. His life wouldn’t be empty.

One tablespoon of olive oil. A knob of butter.
She turned on the heat. 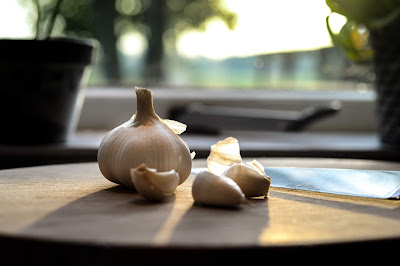