By Cafe Aphra - July 13, 2018
The rusted swing was a steady pendulum, counting the seconds away drip by drip. Billy continued to swing under skies blanketed in an iron hue, hiding the sun like a deep secret.

Billy was a strange looking fellow. He was a tall and gaunt man, his spindly legs as susceptible to break as that of a delicate daddy long legs.

The park was abandoned long ago. He found it sad to see his childhood memories torn asunder, to be hurt by the trauma of time. Time was the enemy.

Things were different twenty years ago. Billy was an eight year old child residing in a peaceful home with his loving parents. The park was once vibrant; a modest amusement park of gleaming slides, silky fields, and clean benches. Children played in abundance, the sound of laughter echoing throughout the tight neighbourhood.

Today the attractions were crumpled remnants of their past selves. Billy's parents had been carried across the proverbial barrier; his best friend moved on to a life of money and love among his new family. It seemed to Billy that life paused for him long ago, so that he was destined for desolation. The groans of the swing appeared to echo these ruminations.

"Move now or we'll call the authorities!" A stout man shouted from beyond the park's barrier. A group of fellow workers surrounded him, ready to tear down the park.

"Even a seed deserves its roots," Billy muttered with such delicacy the words failed to penetrate a few metres. Then, with a sudden burst of anger, he spoke again. "Call who you want! I ain't leaving!"

It sounded valiant to his ears, but deep down he felt nothing but hopelessness. It was all sand, and no matter how he tried it drifted through his fingers. Grain by grain... 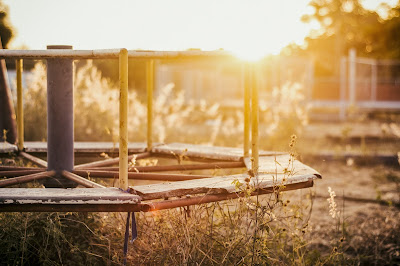