The bookmark is the part that I keep coming back to, perhaps because I think that it is the thing about the whole incident that says the most about me, the only thing that means anything. The exact placement of the bookmark, the way that I precisely, if quickly, wedged it into the book so that the bottom edge cleanly revealed a line of text and its top edge protruded out of the book at its customary surplus of about 1.5 inches.

I was reading in the park, engrossed in a world very far from my own, but one in which I was reading a highly coincidental passage about a car accident. I’m sure that it means nothing that I was reading about an accident, but when I heard the bang of the collision, it was a shock to my mind as much as my ears. It was as though the life of the pages were playing out before me, and as I looked quickly up at the car accident coming to a stop only yards from the bench, I became very confused.

I was already in action of course, as the papers went to great lengths to point out. It wasn’t that my reaction was slow. But my processing was very glitchy. As I looked up, already in motion, my mind had a terrible time trying to disconnect the details from the accident in the story I was reading from the one that was finishing before my eyes. The color of the cars seemed wrong, and the state of the passengers. The whole backdrop of the episode that preceded the crash in the book laid itself over the crash in real life even as I was forcing the first car door open. I had an impossible time trying to entangle the two. One seemed to become the other and then they would switch and blur and before I knew it I felt like I was acting as the character of a story, I felt as though I were in a story and what was happening around me was something that would just be read by someone else.

People referred to me as a hero because of my actions, although I look back on them and I’m not entirely sure what they were. I still am a bit confused about the whole thing, but I suppose that is a normal reaction to an episode that produces shock.

I’m not sure if that day made me a different person, or if it gave my life more directionality, or if it was just me being me. And maybe I am not sure because I only remember one thing clearly about that day. I only remember the bookmark. I remember that in those heightened moments when action was called for, in those first mini-moments before I did anything else, the thing that I did first was take my bookmark and place it precisely into its place in my book. I couldn’t say why, but for some reason that seems like the only thing about that day that matters. 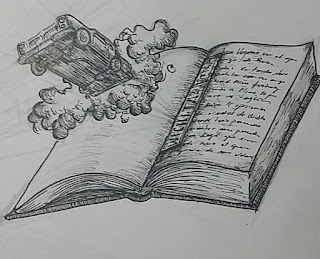