The Sprite at the Stage Door by Anna Barbarella 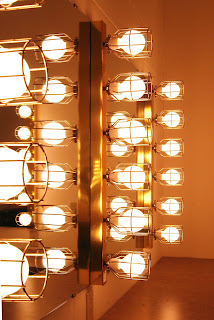 The bulbs of the Empire, a proscenium preserved in aspic, flashed out the name of my first show. Some would say it was not ‘my’ show, that I was just the scriptwriter, but authors are tyrants and I knew it was all me, me. I walked round to stage door with a feeling that, although everyone down here on the city streets didn’t know I’d written the Empire’s newest musical, if they hadknown they’d have revered me very much, and this lent me the power of a dormant volcano.
I entered stage door and – OH! – what a sight. At the desk sat a short hairy man who harrumphed and curtly asked me my name. He was a sprite. Standing near, three or four bored ushers who were clearly waiting for Cassandra Fleming-King or Walter Godolphin, to harass my beautiful actors with flattery.
‘Molly Mead,’ I said. The sprite scribbled it down.
‘You’re the writer, yes? You know you don’t need to come backstage, you can just take your seat for the…’
‘I’d prefer to have a word with Cass and Walter first,’ I said, crisp. ‘Just some friendly support – opening nights aren’t easy, believe me.’
‘As you please.’ He shrugged.

As I walked upstairs the stage door opened again. A flurry of people walked in, Cassandra Fleming-King nestled among them. No matter the disillusionment that might follow, there is nothing quite like seeing a Hollywood actor in the flesh for the first time. At the first gasp at their grace one is almost compelled to curtsey or cry in recognition and rapture, it is personal. The sprite’s saturnine face crumpled into a simpering sycophancy which told of why he sat at this desk all day; the ushers too were aglow, doubtless lifted internally but diminished in all other respects by Cassandra’s presence. But with some disappointment I noticed that her pink lips were thinner than in photos, what’s more she wore trousers – though her appley perfume quickly pervaded the room and made up for this. When some eagle-eyed passers-by photographed through the window, the star yelled:
‘Oh fuck! Lipliner. No photos. Nandy forgot to apply lipliner.’
She dashed upstairs, eyeing me for a second. I dumbly smiled. The assistants gave the impression of indifference and routine, but I guessed they concealed their awe deeper and it burned brighter, such a fuel was needed for such slavishness. They followed her up, moths to the light, they fluttered away.

Struck, I walked to the desk and signed out. Coming down from sublimity the sprite glowered at me. I fled to the streets to feel the air and free myself from the flatterers, taking in final wisps of Cass’ perfume.
‘Do you know her?’ someone called.
On these streets at the bottom of the city I was returned to myself, and reflected on what I had witnessed, the heaving corruption of humanity, the immortality of the artist –
FFF