The Summer of Women

By d - September 13, 2012
This has been the summer of inspirational women.

It started with the Jubilee. The nation, the Commonwealth, the world celebrated sixty years of reign by Queen Elizabeth II. Aside from the all the pomp and ceremony, the necessary rituals and rigmarole that come with her position, Her Majesty is a constant and consistent example of a strong, loyal and dedicated woman: tireless, despite being in her eighties, and a model of decorum and exemplary behaviour.

Then came the Olympics. From the outset, women were portrayed as strong, brave and vital. When Danny Boyle’s industrial revolution began in the Opening Ceremony, a group of Suffragettes marched into the stadium and re-enacted the 1913 death of Emily Davison (a prolific feminist writer herself) as she tried to attach a protest banner to the King’s horse at the Epsom Derby. This was the defining moment of the suffrage movement. The banner itself was carried in a box into the stadium, reminding us of the passion and determination of these women in the face of injustice.

Next on stage were eight hundred NHS nurses, most of them women. Around the stadium they danced, pushing beds of children around, demonstrating compassion and a sense of humour. J.K Rowling appeared, reading to us from Peter Pan, just before her villain Voldemort arose to threaten the children. As the air turned dark with threat, an army of Mary Poppins swooped from the sky to the rescue. Mary Poppins is widely regarded as a delightful disciplinarian who brings order to chaos. She epitomises a combination of fun and authority and presented an example of women as no-nonsense achievers. And so, in this tone, the games began. 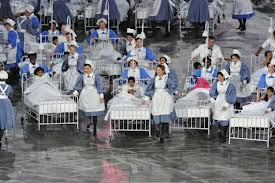 After five slow, uncomfortable days of waiting for a British medal, the women started to win them: Lizzie Armitstead, Heather Stanning, Helen Glover, Victoria Pendleton, Laura Trott, Jessica Ennis et al. They went out there, did their best at what they had trained for and succeeded. We watched women winning medals where they had never won before in sports like Judo, Taekwondo and Boxing. We also saw many women who had overcome the odds to be there. Jo Rowsell won gold in team pursuit track cycling then whipped her helmet from her head, showing a scalp naked from alopecia. Gemma Gibbons, who won silver in Judo, whispered her love to the heavens for her late mother. Heather Stanning, winner of our first gold, is actually Captain Stanning who was on leave from her post in Afghanistan. Mary King, who at 51 years of age is Team GB’s oldest medal winner, survived a broken neck in 2001. Hockey team captain Kate Walsh was hit in the face during their first match, fracturing her jaw. A metal plate was inserted and she returned to take her team to a bronze medal. 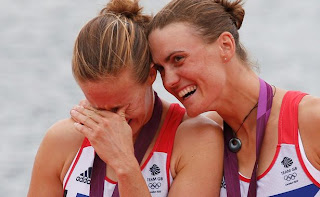 The Paralympics are, to grab a cliché with both hands, a triumph over adversity. The word ‘inspirational’ barely covers the feelings pulled from me as these athletes showed not their disabilities but their outstanding abilities in their fields. Swimmer Ellie Simmonds, half my age at 17, was praised for her maturity and focus as she propelled her 4ft 1in frame to win four medals. Her American rival Victoria Arlen, also 17, spent two years in a coma and only entered the water for the first time eighteen months ago, unable to move her arms. She now has three silver and one gold medal. Eighteen months? That’s less than six hundred days and she managed to turn herself from – her own term – a ‘vegetable’ to a Paralympic gold medallist. That level of determination is incredible. 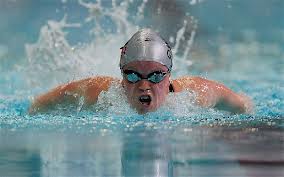 
It wasn’t just our own athletes that stood out of course; there were others that inspired awe and praise. For the first time ever Saudi Arabia allowed women to take part. When you consider that the Saudi Ministry of Education has banned sports for girls, you realise the magnitude of this decision. Public backlash was fierce with the two women enduring personal attacks on the internet and their families suffering racial abuse. The tide turned and Saudi eventually supported their female athletes, hopefully setting a new precedent for the future of the nation’s women.
These women were breathtaking in their skill, strength and resolve. I think it was their resolve that struck me the most. There were tales of years, years, of training to reach the level of fitness and expertise required to win an Olympic medal. They had forgone the lifestyles of their peers, committing themselves to intense training six days out of seven, early nights, strictly controlled diets, moving away from friends and family to find the best location to train without ever losing their focus. These women showed the world that, in the words of Captain Stanning, ‘Work hard and do your best and you can achieve anything’.


I sometimes think, hope, that my writing will spring from my fingertips in a flow of creativity that requires barely any effort. I worry that if the words don’t fall fluently on to the page then I am not a writer. The summary of success I read about in interviews of some authors (‘Oh, I wrote a couple of novels, sent them off and got a six-figure, three-book deal’) makes me feel that it should be easier. I know that the brevity of these statements is grossly misleading, that the reality of the slog, the rejections, the isolation and the loss of hope is not a tale the articles generally want to tell.  Yet I still often lose sight of the fact that writing is a skill that needs practice, commitment and graft.
A few weeks ago I took my two daughters to the cinema to see ‘Brave’. I wanted my Scottish girls to see another Scottish girl in a tale that wasn’t just focused on getting the guy. Merida, the heroine, was yet another excellent example of a strong woman who knew her own mind, followed through on her resolve and had the courage to fix the mistakes she made and then learn from them. She also had the best hair ever seen in animation history. 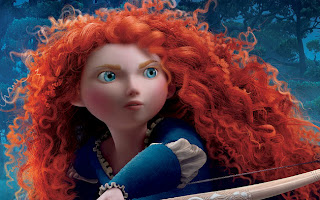 Watching and reading about these women has brought me here to this point today. I am a working mother of two who harbours dreams of finishing her novel and seeing it published, yet I haven’t touched it in months. I think about my characters like absent friends, wondering what they are doing, recalling episodes in their lives and conversations they have had. I fantasise about what the book cover will look like, what I will wear to the publisher’s launch party, who will play whom in the film version. But my commitments to family, home, friends and work have pushed it all aside for almost a year. I struggle to get a grip of the tasks that need doing and try to fit everything in, but I also know there is a lot of time that I waste either through inefficient planning or sheer laziness and procrastination. I want to finish my novel.  I believe I have an important story to tell and a responsibility to tell it. I want to see how far I can go with it in the difficult world of publishing. But I also need clean the bathrooms, make the packed lunches and go to work.
Would Sarah Attar, the Saudi athlete, have received a standing ovation when she finished last in the 800m heats, if she had cowed to those who called her ‘whore’ on Twitter and stayed home? Would Kat Copeland, one half of the gold winning lightweight double sculls pair, and a teacher from Teeside, have stood weeping with incredulous joy on the podium if she had said ‘Nope, sorry, got too much marking to do this week, I can’t manage rowing practice’? Would Victoria Arlen feel the thrill of possibility and sense of achievement she must now have if she had shied away from getting into that pool? No.


I have reached a stage with my novel when frankly, I want someone else to finish it for me but let me take the glory. I have avoided writing the trickier bits and have an awful lot of editing to do. The joyful honeymoon period of creating my characters and plot has passed and the thrill of research is over. The frenzied pace of writing that I kept up for months when in full flow has seized up. I am at the stage where I need to tidy up after the party and that’s never much fun. But I know that to get where I want to go, I need to get on. These women have shown me what can be achieved if you have unwavering focus and determination to fulfil your chosen role.
So, I have resolved to use them as my inspiration. For the last few weeks I have got up at 6am to get an hour of writing done before the rest of the house comes to life. I am tired, but look: you are reading my first ever blog. I will do as Captain Stanning suggested, as she held aloft her gold medal in glee. I will work hard. I will do my best. I will see what I can achieve.