There is something about those words which carries echoes of Alcoholics Anonymous: I'm confessing to something; revealing something that I might otherwise keep hidden from people (and in most areas of my life, I'm more likely to say "Hi, I'm Zoe and I'm a mom"). When I say that I'm a 'writer' I'm taking on an identity which only feels truly comfortable when I'm within a community where other people are similarly afflicted, and it's only recently that I have had a community within which I can 'be' a writer. 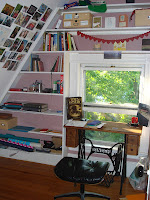 I take my writing seriously and I work hard. My daughters leave for school early in the morning and I wave goodbye to their big yellow school bus, come back into the house, squeeze the last drops of coffee from the coffee-maker, and sit down at my desk to start writing. I'm lucky and I appreciate how lucky I am. I have a tiny room at the top of the house which is crammed with books and paper and bottles of ink. I have my own desk. I have a partner who earns sufficient money to support me while I write (and a visa whose conditions forbid me from engaging in paid work). If I think of the advice given out by Virginia Woolf, it seems that I have all of the things that she recommended: "A woman must have money and a room of her own if she is to write fiction." I have both and I'm trying, really trying, to write fiction. 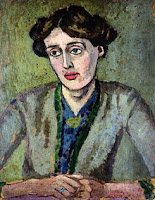 But I'm not sure that the space and the money are enough. I think that Mrs. Woolf was a tad disingenuous when she said that a woman just needed money and a room of her own. Woolf, of course, had money and she had a room of her own (well, several houses actually, but what's a property or two between friends?), but she was also part of an extensive community of writers and artists: E.M. Forster, J.M.Keynes, Roger Fry, Vita Sackville-West, Duncan Grant... I'll leave it to the academics to analyse the exact effects that being part of the Bloomsbury Group had upon Woolf's writing, but their influence, their creative stimulus, generative ideas, and aesthetic guidance could not have been insignificant influences upon her writing (and we might also need to acknowledge the usefulness of having a husband who ran a printing press).

I'm in awe of Woolf's writing - I couldn't write with her genius and dexterity even if I had Maynard Keynes as a house mate, occasional sleepovers with Vita Sackville-West, and regular dinner parties with E.M. Forster. My point here is merely that a woman's writing improves through having access to a creative community of writers. A room of one's own is all very well and good, but good company is important as well.

My first few attempts at finding a creative community were not very successful. The first time that I attended a self-proclaimed 'writing community event' was two years ago. I'd started to think about writing, I'd started to even spend a bit of time trying to put words onto paper, and when I found a flier for a local event for regional writers, I plucked up the courage to attend. The afternoon meeting took place at the Tyneside cinema in Newcastle-upon-Tyne. It's a stunning location and the meeting was well-attended by (mainly) men I didn't know who talked about writer's block and publishing deals and the value of paying for a good copy editor. During the two hours that I was there, I felt that I was shrinking. I thought that I had been 'writing' and that I was on the way to becoming a 'writer', but that room was filled with "real writers" who wanted to talk about themselves. By the time I left, I knew that I wasn't a "real writer" and I was no longer sure that what I had been doing - putting my pen to paper to record made-up stories about imaginary people - was even "writing". 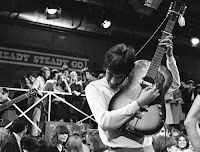 My next attempt to find a community was more modest. I saw an advertisement for a workshop for 'beginning' writers. The location should, perhaps, have given me a clue as to who would attend the group: it was held at the Age Concern building and, predictably perhaps, the group's average age was approximately 78. There was an elderly man who wrote witty, lewd and, sometimes, obscene sonnets about a much younger woman with whom he was enamoured; there was a delicate mohaired woman who wrote very short prose poems about different varieties of the color purple - she could spend five minutes reading out 12 words because purple was such a spiritual color for her that she let each word of her poems hang in the air before moving on to the next word; there was a fifty-something year old man (the other baby of the group) who wrote unpunctuated short stories about the Newcastle Rock'n'Roll scene. These last stories frequently fed enthusiastic discussions about who had seen which bands in the 1960s. I loved that group because it felt like being part of a local history project. I'm not sure, however, that it was useful as a writing group - the other members didn't know what to do with a woman in her thirties who was writing about the brutality of slave riots in the 1600s. They would sit politely as I read out graphic descriptions of burnings and beatings. Then there would be a long period of silence during which the mohaired lady would stroke a purple wool keyring that attached to her bag and the elderly sonneteer would discretely adjust his flies... then someone would say that they really enjoyed my story and they couldn't wait for me to read more. Then there'd be another short pause before we started talking, with significant relief, about The Who, The Animals, and the Rolling Stones.

And, at some point over the past two years, I also found myself in another writing group filled with beautifully manicured ladies who all considered themselves to be writers. They had had some success and were keen to share sage advice. They looked through drafts of my work and recommended that I changed it, rewrote it, made it closer to chick-lit, took out the lengthy descriptions, made my heroine more sexy, brought in a love interest, used shorter words which would be more accessible to the common reader.... They wanted me to write a different book, they wanted me to be a different type of writer. And I tried to follow their advice, but realized that I didn't want to write like them any more than they wanted to write like me. Their advice was relevant for the kinds of books that they published but was of limited value for the kind of book that I wanted to write.

I think that I booked a place on an Arvon course when I was at a low ebb. I had spent enough time writing to know that it wasn't as easy as it had first seemed. I had attended enough writing events to know that I wasn't going to easily slot into a pre-existing writing community. I had no way of being able to assess the quality of my own writing or to know whether it was worthwhile persevering with my novel.

The writing course was based at Moniack Mhor: a magical place near Inverness which is nothing more than a couple of white stone cottages crammed with books and a large communal sitting/dining room. At that particular course, the combination of the tutors, the other course participants, the location, the food and the weather, came together as a perfect storm which transformed several of our lives and generated the on-line writing community which is now growing into Cafe Aphra. For a week I felt like a writer - I lived and breathed writing - and then when I was plunged back into my daily life we continued to support one another as a virtual community: via email, an improvised forum and, now, Cafe Aphra.

Our community works because we recognize that we are all different: we are writing different types of books, we live different lifestyles in different parts of the world, we have different political ideals and different professional backgrounds. Our community is a safe space in which we can share our work. We respect one another as writers, as individuals, as human beings and, therefore, no-one is going to attack our work or be vociferous in their criticisms. We offer our thoughts on other people's writing, but we know that our thoughts, our advice, our recommendations are essentially subjective. We celebrate one another's achievements without a sense of envy; we support one another through challenging life-moments with empathy; we offer encouragement at those times when the writing won't work; we suggest practical advice when it's needed.

And, nowadays, my routine has shifted a little. After I have made the breakfast and the packed lunches, after I have made the beds and fed the cat and walked the children to the bus stop, after I have walked home and squeezed the last bit of coffee from the coffee-maker... after all of that, I go up the stairs to that room of my own and switch on my computer and find myself within a community where I can say, "Hi, it's Zoe here and I'm a writer."