Blemished: in the name of gods she didn't understand. She had been no different from the other girls she used to play with - girls who wouldn't dare meet her eyes now.

Every morning she would go to get water from the river with her mother. It was a long way down to the river and they had to cross part of a forest where many wild animals lived. Later they would boil the water. One bucket was for cooking and drinking, the other one for washing and watering the animals. Her family would take their lunch cuddled together on the loamy ground of their little hut. Every evening, after she had fed the animals, she used to sit in a circle with her friends, singing and dancing, exchanging stories about the animals of the forest. Every day had the same routine as the day before.

Then, one night, everything changed. Two of her little brothers were taken ill. It happened so suddenly, without any warning. Their bodies were hot and their tongues swelled up, bluish in their little mouths. Both of them died before the sun rose. It was like a bad dream and she couldn’t wake herself up. There was an unnatural silence inside the hut. Her mother glared at her, hatred flaming in her eyes. Finally she let go of the dead children clutched in her arms and pointed at her with her trembling hand.

"It was you!" she screamed, spittle sparkling from her angry mouth. "You killed them, you little witch!"

There it was, the horrible word. Its sparks burned in her heart, used up the air she needed to breathe. It hurried through the village, spreading its poisonous seed from door to door.

Her mouth had gone dry; words had left her, words that wouldn't have saved her anyway. Soon, she could hear voices coming nearer. The deep voices of men, the elders of the village, who were discussing her faith.

"Stone her!" somebody said, "Burn her!" suggested the voice of her uncle.

She could feel fear blazing through her veins, faint from the nausea that overtook her.

"Get out!" A new voice whispered from somewhere in the darkness of the hut, "Flee before they come and take you away!"

She couldn't think clearly. Yet her hands had already started pushing against the wall, seeking the small hole at the back. There! She had found it! But it was too small... In a panic, she shoved away a few crumbling bricks. No one noticed the noise. Her eyes misty with tears, she managed to squeeze through. Her feet carried her away, pushing forward in time with the beating of her heart. By the time they had found out, she was already hidden deep in the woods, running for her haunted life. 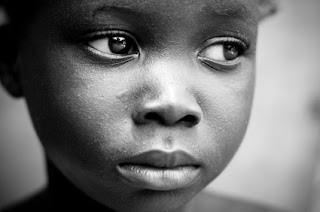