By Unknown - February 13, 2014
They were in a coffee shop when war was declared.  As the first brick drove a spider’s web of cracks across the window, Bob instinctively grabbed his granddaughter and pulled her beneath the table.  Under the continuing barrage, glass flew through the sunlit air, beautiful and lethal. Someone screamed and Bob turned to see blood trickling down a woman’s cheek.  Beside him, Maddie began to sob.

Over the past couple of days, the news had been filled with reports of rioting in some of the more rundown parts of London, but no one had expected the heat wave of violence to spread to this affluent suburb.  Looking around, Bob could see that the customers in the café were paralysed, as much by the shock of discovering the myth of their middle class immunity, as by the missiles landing around them. He would have to act.

With the help of the impassive barista, used no doubt to much worse aggression in his native Bosnia, Bob herded everyone to the storeroom at the back of the building. Behind the relative safety of the barricaded door, people recovered their voices and opinions about youth culture, social security scroungers and how it wasn’t like this in their day. Bob didn’t join in.

As he sat cradling Maddie, Bob recalled how it felt to be young and looking for a fight.  He knew all about the urge to rebel against your elders, to be part of a mob itching for action. He closed his eyes and remembered that journey to Brighton, the fur trim on his parka whipping up against his face as he clung onto the back of Freddie’s Lambretta.  His hand twitched as he felt once more the wooden bar prised from a deckchair which he’d swung as they swaggered towards the pier and the rockers.

A thump on the door announced the welcome arrival of the police. As Bob carried Maddie out into a wasteland of destruction, one of the policemen recognised him and saluted respectfully.

“I hope you’re both alright, Sir Robert? We’ve got it under control now and arrested about sixty thugs, so you’ll be busy when they come up before you.  They deserve everything they get.”

Bob didn’t reply as he picked a sliver of glass from Maddie’s hair and helped her over the debris into the street. 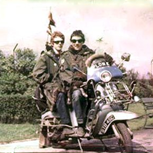