Words on Writing: Keeping it real

By Unknown - February 05, 2014
What does truth mean in relation to our writing?

Can we write well without thinking about truth?

Stephen King, in his excellent On Writing, gives us a good place to start thinking about this:


So okay - there you are in your room with the shade down and the door shut and the plug pulled out of the base of the telephone. You've blown up your TV and committed yourself to a thousand words a day, come hell or high water. Now comes the big question: What are you going to write about? And the equally big answer: Anything you damn well want. Anything at all... as long as you tell the truth.

My first novel, Frogsbone, takes place among newly arrived immigrants in 1908. As I wrote this, I became increasingly aware of how much I would never know about that world. However much I researched, there were parts missing from the jigsaw: the shop window just beyond the photo's frame, the precise smell of the street after rainfall, the soundscape of early motorcars, horses' hooves and foreign voices reverberating from cobbles and brownstone buildings.

It's easy to become despondent about how little one knows and how much more there is to be learnt, but one of the breakthroughs in my writing was the realization that it was okay not to know everything. No-one knows everything. There can be no view from nowhere. Truth can come from attention to the smallest detail as surely as it might emerge from a bank of extensive knowledge.

Through my writing I seek to capture the truth of how the world would have seemed to my characters. As with any real person, their perspectives are partial, their experiences are finite, and their interpretations of what they think they see are shaped and moulded by what they already know. 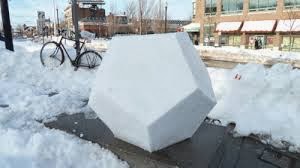 Imagine, for example, that you are here with me now. Outside, the snow has been falling for several hours: small icy snowflakes which have already covered over where I dug out the sidewalk only an hour before. If you are from the UK, it might seem to be a lot of snow; if you are from Canada or the Midwest, you'll probably express surprise that the roads are empty and the schools have been shut: it's less than a foot of snow after all. Because it's nearly noon, you might want a bit of fresh air, some lunch, a coffee - whatever it is that you are desiring will affect your perceptions of the walk we take past the big house on the corner, down the hill, and onto Massachusetts Avenue. Maybe you've been here before: as a student at one of the many universities, attending conferences, or hanging out with friends? If you have, things probably seem familiar and bring back a clutch of memories. Perhaps your memories are so clear that you notice the large white clapboard church has been moved 20 feet to the south to make space for the university expansion. Of course, if you haven't been here before you won't notice that detail, and if I tell the English you about what they've done you might wonder why they made such a big deal trying to preserve a wooden church which is only a few hundred years old. If you're a travel junkie and you're needing a caffeine fix, you've probably already read about Simon's Coffeehouse and you'll tell me it's the best place for coffee in Cambridge (I'll agree); if you're a history buff, you'll recall that Paul Revere galloped along this road to tell the Minuteman that the English were coming; if you're my friend Sara, who is writing a book about Afghanistan, your attention will probably be drawn to the Afghani restaurant, while the antiques gurus among you will admire the Bauhaus inspired chair in the window of Abodeon (a bargain at only $2500).

My point here is that we all notice different things: that's one of the many things which make us unique. And when we write, whether we are writing biography or memoir or fiction, good writing demands we stay true to what our characters would know. (Hemingway would argue that capturing the truth meant being as attentive to what one omitted as to what one elected to include: but that is a discussion for another day).

In my previous role as an academic researcher, I was preoccupied with discovering the 'journalistic truth': combining research methods to establish the highest possible warrant of how things actually were. Each attempt to capture this kind of 'truth' abstracted it further from an individual human's experience and in this sense, I felt, reduced the humanity of the research. As Salman Rushie explains in this video clip, 'human truth' can be a very different thing from 'journalistic truth', and our interest in human truth is why we write literature.