By Unknown - February 24, 2017
She watched it fall in waves gracefully down to the floor. She’d always been told that it was her best feature, thick and luxurious with a single streak of white. It was natural, she insisted. A reminder of her busy life with four children. That streak was a trophy, the spoils of battle on a field of teenaged angst where more than once she’d had to pick her hill to die on.

That battlefield had changed over the years. Now she was waging a war upon her own body as the chemo worked its gruesome magic. Her life was a whirlwind of doctor’s check-ups, follow-ups and throwing up. Now those very same teenagers were riding into battle alongside her, lances raised and armor ready to fight off the latest onslaught of her disease.

Breast cancer. A large tumor that had grown in the single year since her last exam. She’d lived the past months in suspended animation, going through the motions as they rallied around her. She worked at an elementary school, the kids all making get-well cards, wishing her well as the first treatments began.

She watched the white streak finally float by, the remnants of her once prized mane waiting to be swept away. She was Joan of Arc at last, sword held high, her army raised behind her. She would not die on this hill, not today. 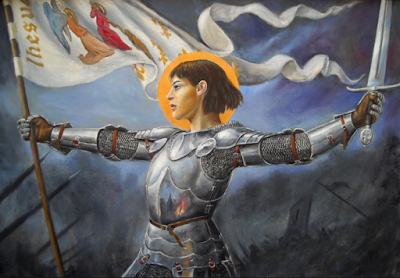 by A. Elizabeth Herting