G is for Gender 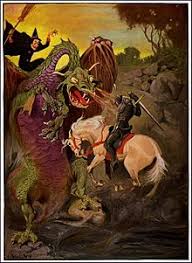 I was going to cover G for ‘grammatolatry’, the worship of letters or words. I considered talking about the importance of word choices and lament words deemed ‘archaic’ which I believe ought to be repackaged and resold to today's readers. Instead I decided to actually challenge myself and tackle something I wouldn’t normally touch - Gender.


I recently came to a point with my novel where I realised it needed to be radically cut down. I was trying to force a three book trilogy into one book, it just wasn’t working. The easiest way for me to extract a huge chunk, whilst ensuring what was left still held together, was to remove one of the main characters, entirely. It was a character I was particularly fond of, but I had enough material to have a second book devoted almost entirely to her story. I went back to my leaner, meaner novel and began happily re-editing, tying up loose ends and generally massaging it into a fully-formed entity. It took me a while to notice that having removed such a strong female character, I was left with a book filled, predominantly, with men.
Now I like men but, as a woman who has made her own way in world, I certainly don’t want to be inventing one in which women like me, or women who would inspire me, do not exist. Of course there were female characters featured in the novel and I had a great deal of fun developing their back stories and bringing them on, either earlier than I had intended or in more depth than I had anticipated - but this wasn’t enough.


My novel is a fantasy novel (well, more alternate Earth, with a little magic thrown in, rather than goblins and elves) and the fantasy genre does have a rather patchy history in smashing gender stereotypes. Generally fantasy takes place in a pseudo-medieval era; because we all like old castles and a nice dash of swordplay - well I do, anyway. They are also often based on ancient European mythology. Replete as it is with inspiration, imagery and goddesses, this is often a prime offender in promoting unfair gender stereotypes. The medieval precepts of kings and knights waging war and rescuing fair maidens is so often the bedrock upon which fantasy novels are built. That is not to say there aren’t novels that break the mould. Indeed, the outstanding Games of Thrones has more than its fair share of fearless women. However, even here there is still a tendency for seduction (clearly the preserve of the young and beautiful) to be their weapon of choice. Yet, if fantasy is really fantasy then can it not too be based on an entirely different social composition? The answer of course is ‘yes’ and less traditional ‘fantasy’, such as The Hunger Games,  tackles this well.
I chatted over the development of my novel with a good friend and graphic novelist. We had to admit fantasy isn’t just a little stereotypical in terms of the women it represents, but also the men. Long-haired, horse-riding, sword-wielding, muscular, brooding, mmm, you get the idea. My friend set me an interesting task - to take at least one of my male characters and just make him female. It was an interesting exercise. I found that apart from changing “him” to “her” etc. I really didn’t need to change much at all - but I did find that the character gained depth in my mind and this expanded her role in the novel itself. Having said this I still feel I have some way to go and perhaps it will be future works that will benefit more from my developing thoughts in this area.


I suppose the message of this post is that it isn’t necessarily bad to have characters who are stereotypes, it can be amusing or ironic (and we do sometimes meet them in real life!). It’s also not necessary for every piece of fiction to have a feminist (or any other) agenda, because most people read not for education - at least, not explicitly - but for entertainment. However, as writers we should consider the effect our words may have, question their interpretation and how our own lives may have shaped the prejudices or fears manifesting themselves on the page.