In Sickness and In Health

His feet repulse her. It’s her own fault. She threw a pair of socks at him telling him to put them on and keep them on. He just took it to heart. The socks, one folded into the other, were odd. One yellow. One black. He’d not taken them off. Not for days.
He’s lying on his side now, away from her. She reaches out to his back. It’s freezing. She squeezes her eyes, waiting to hear him not breathing. Ten, nine, eight. How long should she wait. Seven, six. The bedside clock quietly matches the seconds. It’s years since the alarm went off but the ticking is soothing. Breaks the silence. He used to rise before her. Brought the tea. Left the house at eight.
He snorts - a mix of breath and snore. He moves his foot back, brushing her calf. She stares at the ceiling, moving her legs to the edge of the bed. Stretching one foot from under the quilt she wriggles her toes. Long wisps of grey hair spread out on the pillow. He needs a haircut. And his bloody feet. Toenails. The heating’s come on. He’s still sleeping. She gets up.
The steam from the kettle mists up the window, there’s no way of knowing what kind of day it will be. This bit of the morning is the best. Alone and quiet. Now the hour’s gone back it feels lighter, like you’re waking earlier. She stares at the disappearing pattern on the window and pulls his cardigan round her. Hugging her arms she smells him, back when his feet danced and chased her round the table.
Her throat catches a sob before it breaks. Head bowed, she feels him behind her, his hands gripping her shoulders moving to rub the back of her neck. Massaging her tiredness. Kissing her hair. His feet so light, he’d creep up to her at the sink. Grabbing her, spinning they’d dance a while, kiss and laugh. Giddy memories, unsteady like young love.
It’s getting lighter outside. He’s not down yet. The flutter in her chest stabs a bit, worse than yesterday. She puts the kettle on again to drown out his shuffle, one hateful foot at a time. She keeps her back to him, eyes closed. She feels sick but swallows it. He’s behind her. Helpless arms hanging.
Will he say her name? If so, it won’t be a bad day. He mumbles and she can’t make it out. She takes his cold rough hands as they slowly two-step to his chair. He leans in to her, his cheek touching hers - like a waltz. He kisses her forehead and hums a tune, letting her take his weight. She takes his burden laughing at his tune - the wedding march.
He falls back in the chair smiling and she forgets for a moment that his feet repulse her. 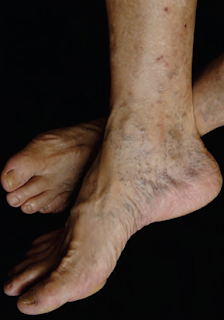