One Moon, One Star 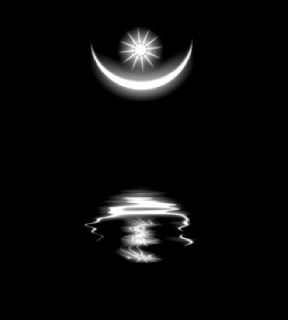 There is just one star in the sky when she pulls herself out of the water. Glancing up, the moon hides against blue-black infinity, shows itself, then hides again. Bursts of cloud weave, dance, disguising chunks of the moon’s white surface nibbled into scalloped edges. The green and white sea flexes it’s power, playful, deadly, siren-dangerous, as always. The tide begins to turn. She must be careful. The sea can take you back if it wants to. She can’t go yet. Not yet.
The salt tastes delicious around her mouth. She scents the silt and seaweed remembering green, purple and darkest blue from her water world. Warm wind washes over and around her and welcomes her at last to the land. She is exhausted but cannot rest; her time here is measured by the tide. There should be enough, just. Yes, there should be enough. This is not her first time.
She turns her back to the sea and the single star, shining softly down on her, and makes her way, slowly, up the sand. Now the crashing water starts to subside. She barely notices and continues to force her way up the beach, purpose intact.
A lifetime later, a constellation of small sticky pearl-green shells huddle, glistening, in the moonlight. One thump at a time, they are covered by warm white sand, as the moon’s edges are stolen into a different shape. The thumps continue until half then all her investment is covered, leaving only tell-tale mounds of effort.
She turns back and makes her way to the water’s edge. She looks up, disorientated because now hundreds of stars stud the sky. She remembers the point where the single star was fixed and turns, finally, in the right direction. She notices, for the first time, others dragging themselves back to the water scratching parallel lines behind them. They, too, are ready to be taken by the tide. She turns towards the clouded moon and silently slips away. 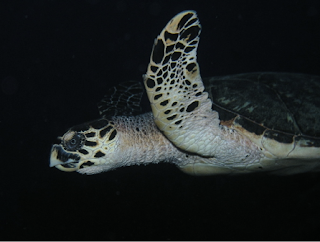