She was at her loudest now, a black wall of wind and rain testing the house to destruction. Another chunk of masonry fell and the walls sighed. I holstered the Glock. There had been no sign of looters for two hours.

A branch crashed through the kitchen window, showering me with glass, and the wind smashed plates and ornaments like a rowdy teenager. I staggered backwards into the hallway, unable to believe the storm’s fury, and turned for the creaking front door. As I lifted the latch, the door bulleted inwards, slamming against my face. I tasted blood, but pulled myself up in the opening, bracing myself between door jamb and frame.

I hesitated. Then, a tearing sound ripped the air as the tempest decapitated the building, lifting roof from walls like some demonic executioner swiping head from torso. Inside now outside, a torrent of wind, rain, wood and plaster fired down. I had no choice, I ran, out into the mighty lady’s buffeting power, as she fought to push me back with angry fists of air.

The street was a river, and an unlit car floated towards me like some ghostly, mechanical cow as a power line sparked, silhouetting it in electric blue. For that split second, as I fought to stay standing, I just stared. Slower to comprehend than the wall of water was to engulf me, the ton of metal dragged me under. Pain tore through my calf, but I surfaced, thrown against fence posts and storefronts, adrift in the sea of debris. By some miracle, I hooked onto a lamppost, where I clung onto life.

These days, my home is a refuge, and my chair has wheels, but at least the thieves never took their bounty, even if the Lady did. 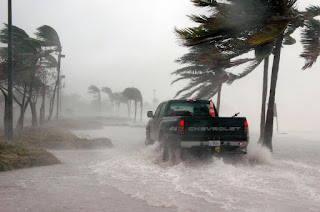