By Cafe Aphra - June 29, 2018
She watches her sleep. The small hairs around her nose quivering at every inhale and exhale. If she wasn't careful, she would wake her; she couldn't deal with a crying child right now. Not when they were in the next room.

She kneels down next to the bed, watching the infant's eyes flicker as she dreams. One wrong move could ruin it all. A brush of the dainty curls out of the girl’s face could wake her.

All she could to do was watch, nothing more.

She’d remembered the small child during her chats with the Dr. He’d brought her up, when she was sick. A child’s face had materialised in her mind; a mess of golden curls and freckled cheeks. The child she was watching sleep had the same features. She was more tanned than she had recalled; a golden sun kissed look made her look like someone else’s, but she knew that she was hers. Her new family treats her well, but she would treat her better. She promised the doctors, and now she promises her darling little daughter. Her daughter with the small toes, small hands and button nose. She was… is... a good mum.

Annabelle had been taken from her. But she was changed now. She would take Annabelle back. To the place she should be calling home. She had all the toys at home. She used to love the little elephant. She would again.

The hairs began quivering again, tickling against the small nose. The child rolls over, her arm hitting out. It narrowly misses her, caressing the soft cotton of her shirt. Do not wake the child. All she wants to do was touch her. To brush the small hairs out of her face.

How long ago was it that she was taken? She couldn't remember the days. Was it months? The child grumbles in her sleep, her fist balling. Perhaps she was having a nightmare. She looks at the clock next to the bed. She needs to leave soon, or she will be caught. How can she leave without her child? Tears rise in her throat, and she fights the need to clear them away.

A small finger hooks her shirt, and she freezes. As quickly as it touches her it releases. No risk of waking sleeping beauty. The gorgeous girl under the pink covers will not be awoken by a kiss tonight.

It's time to leave. She had to go, or she'll be back in there, with the doctors and the needles. She doesn't want to go back there; not now, not ever. She refuses to go back. She will scream if she has to set foot in there again. She stands and makes her way back to the window, looking out at the drop to the ground.

With one last, mournful, look at Annabelle, she took a deep breath and slid past the curtains. Her whispered goodbye hung in the air then floated towards the sleeping toddler. 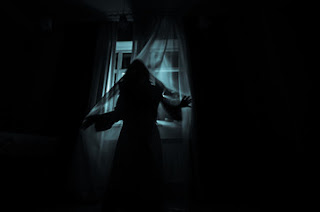