I will bring you red apples 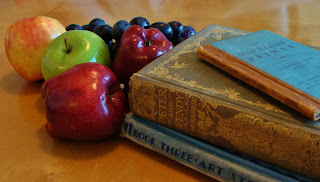 I will bring you concord grapes,for you like the color of them

I will cut the meat for you,in razor thin slicesthe nurses tell meto let you feed yourselfto gain your strengthbackbut you and I knowyour arms become more flaccid each passing night,and no amount of measured movement,will make that rightI will make the soft cloth wet,caress the dirt away, for they scrub youlike canvas, painted all wrongI will brush your hair,a hundred strokesas you didI will read you storiesof children at playI will bring applesfor your wooden bowl,to help us remember red, round things,beginnings, in a world before this roomof endless ending

by Jim Cunningham
Poem of the Month