The Yet Unknowing World by Fiona J. Mackintosh


From the bending willow’s grasp, she slides into the river. Eyes to the sky, she floats downstream, opens her mouth and sings.


Good morrow, ’tis Saint Valentine’s day, All in the morning betime, And I a maid at your window, To be your Valentine.

Borne by her skirt’s twin billows, she sings of the fickleness of Princes, of he who called her celestial, his soul’s idol, sending her letters drenched with longing, “Doubt thou the stars are fire, Doubt that the sun doth move, Doubt truth to be a liar, but never doubt I love.”

Words that gave him leave to slide his arm around her waist, to kiss her neck under the heavy hair that floats around her now, mossy with crow-flowers and dead men’s fingers. But all too soon love turned to ashes in his mouth, and he called her bawd and wanton, as a riddling madness drove his mind to fever and his hand too quick to the sword. One thrust, and her father’s blood, a waxen pool of scarlet, seeped up the arras like a blush.

As a bird in sleep, her sodden garments fold around her, the sweet green blur bruising to gentle black, and she’s weightless, stoppered, drifting and easeful as a babe in the womb. Yet as she sinks, she’s torn up through the river’s skin, and the air’s a blade in her chest. Bones laid out on the chill, hard ground, she’s gripped by a violent shivering.

Her eyes open. Women chafe her feet, wring water from her hair. Above her kneels the Queen, her face a woeful moon.

“Oh Ophelia, you were to be my Hamlet’s bride – I would not let you drown.”
There’s not air enough to speak, river ooze still lodged in the clefts of her lungs.
“I’ll have my women bear you to the nuns. They’ll nurse you back to your wits and, when you’re well, they’ll put you on a ship to England.”

“I pray you, when you reach those foreign shores, tell the world of everything you’ve seen these days, every carnal act and casual slaughter, even those that were my own. The sands are running out for me, but you, Ophelia, can live to write the sorry tale. I beg you for the sake of him we love.”

The Queen bends close to hear her answer. Voiceless yet, Ophelia unfurls a trembling finger to a point and in the pliant river mud she writes “I Will.” 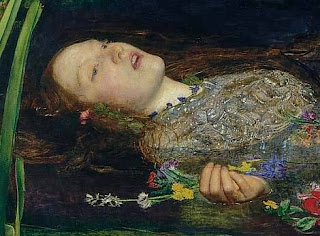 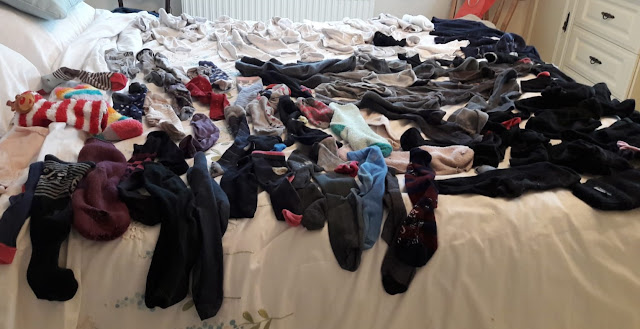 She gazes in a kind of mystical awe at the myriad of socks laid out over the king size bed. Ankle socks, trainer socks, walking socks, Christmas socks, poodle socks (remember those?), long socks, posh socks, socks with holes in, even a special ballet sock. The most extraordinary feature of this collection is the fact that not one, not even the limited edition sock that has a personalized image of Gareth Bale printed on it, is a match. In the school staff room, she recounts this discovery to the amusement (mainly) of her colleagues. One is, however, looking genuinely puzzled. “How?” the neat, tidy and super organized teacher asks in bewilderment, “How does that happen?” “How does it not happen?” replies the Sock Queen. “How, how does anyone keep socks in pairs?” Super organized teacher suggests gently that Sock Queen pairs the socks before they go in the washing machine. “I’ll try,” promises Sock Queen as the bell goes to mark end of break. She leaves the staff room, now litter
Read more